LOUISVILLE, Kentucky – Team Mitch today launched a new statewide television ad campaign to spotlight the stark contrast between the records of failed liberal politician Amy McGrath – who proudly considers herself to be more progressive than anybody in the state of Kentucky – and the Commonwealth’s coal champion, Majority Leader Mitch McConnell. In addition to holding McGrath accountable for shamefully deceiving voters with false attack ads, “Miners” highlights how McConnell delivers wins for Kentucky coal families. McConnell’s tireless efforts to secure a permanent extension of health care benefits for miners and their families earned praise from the United Mine Workers of America, which crossed party lines to contribute to Team Mitch.

“While the anti-coal crusaders who support Amy McGrath in Washington have an unquenchable desire to destroy every coal job, Mitch McConnell has an unrivaled record of fighting for Kentucky miners,” said McConnell Senate Committee campaign manager Kevin Golden. “Nobody has done more for Kentucky coal miners than Mitch McConnell – and nobody has done more to try to put them out of work than the liberal Green New Deal champions backing Amy McGrath in this race.” 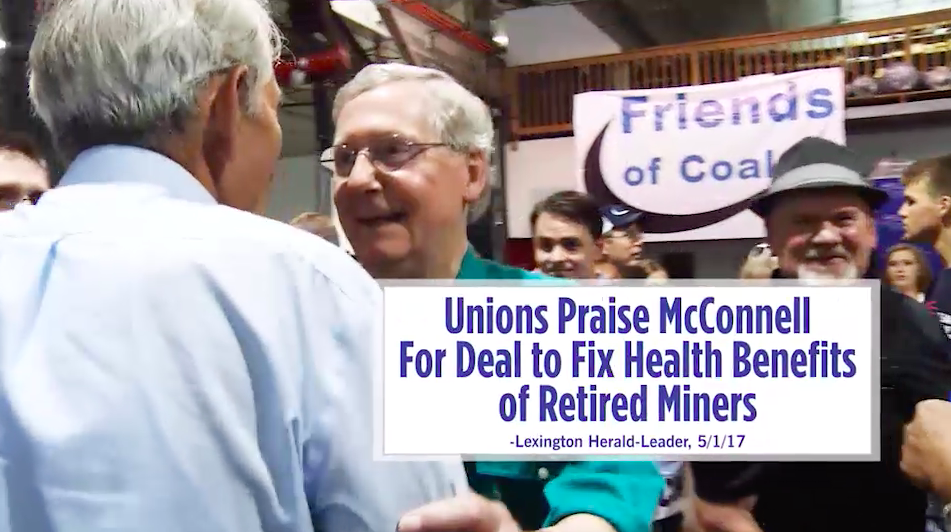 ANNOUNCER: While Amy McGrath was calling herself the most liberal person in Kentucky and attacking President Trump, Mitch McConnell was fighting for coal miners’ health care.

ANNOUNCER: And the United Mineworkers’ Union crossed party lines to contribute to McConnell.

MITCH MCCONNELL: I’m Mitch McConnell and I approve this message.

MCGRATH: “I Am Further Left, I’m More Progressive, Than Anybody In The State Of Kentucky.” (The Washington Free Beacon, 8/20/18)

Majority Leader Mitch McConnell “Was One Of The Lead Negotiators On Coming Up With The Bipartisan Deal” To Secure Health Care Benefits For Coal Miners And Their Families. (The Courier-Journal, 5/2/17)

On 2/24/17, The United Mine Workers Of America Contributed To McConnell Senate Committee. (The Courier-Journal, 5/10/17)